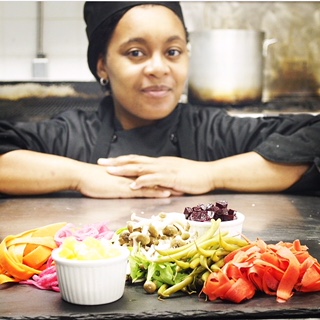 Growing up with her family that shared the same passion, Crystal fell in love with the kitchen at a very young age while watching her father, a pastry chef and her mother, a graphic artist.

After graduating from Sir Sanford Fleming in Culinary Management while finishing a dual co-op chef apprenticeship. She earned her way to become the Sous Chef at Casa Loma in 2010. Crystal later worked for other restaurants and caterers across the city, training under various chefs to learn extensive culinary skills. In 2014, She earn some of the highest praises from respectable clients and her management assets as Head Chef with the company Elle Cuisine. It was then in early 2018, when she decided to go out on her own. Taking the wealth of experience, to create something that other foodies could experience called “Kanvas.”

When she's not in the kitchen, most of her spare time is spent with close friends and family.