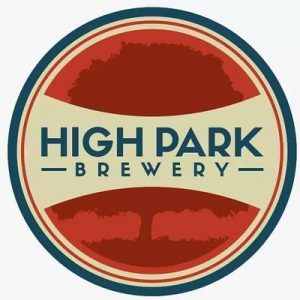 High Park Brewery was established in Toronto, Canada by John, Dan, Ted and Jeff (above from left); four long time hockey buddies and craft beer lovers, with amazing support from wives, kids, friends and teammates.  It all  started one summer after a game of golf when Dan said to no one in particular: "Johnny and I are planning to start a craft brewery".  To which Ted replied "so am I! let's do this together!"  The conversation continued at a local restaurant on Roncy later that evening. Jeff was excited and also joined in, and after literally thousands of hours of planning (and some considerable amount of beer tasting) High Park Brewery was formed.

We are all local High Park area residents and so it made sense to name the company after our 'hood: High Park Brewery.  We are strong supporters of local and community events and suppliers.  Our first festival was the Junction Night Market which was a charity event in support of local food programs in the West End of Toronto, and we are formally committed to donating at least 2% of our gross earnings to charitable and environmental causes.  We formalized this commitment by becoming a Certified B Corporation in 2017.  Check out our B Corps page for more details!